Who better to feature next than Rebecca Davies?
We have finished hanging her work today and it looks smashing!

The illustrations exhibited as part of Elefest are a small selection from a number of drawings Rebecca has made over the last three years in the Elephant. She was brought up in the area and returned a few years ago. Living in the Elephant and Castle, you can't avoid the term regeneration and all that goes with it. For her it means change. But let's put that out of our minds a minute.  These illustrations are a celebration of the Elephant and its community - Now. 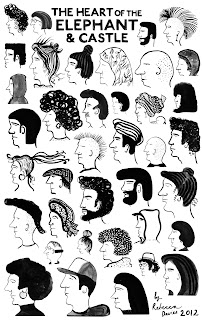 In 2010 Rebecca graduated with an MA in Communication Art and Design from Royal College of Art. Her illustrations of the Elephant and Castle got the Sheila Robinson Prize for Drawing and where short listed for the Helen Hamlyn Design Award.In 2011 Rebecca co-directed Studio at the Elephant, a unit in the Elephant and Castle Shopping Centre acting as a studio for artists to work with the local community and providing a platform for locals to express themselves creatively. Studio at the Elephant celebrates local people and their cultural heritage.Rebecca has collaborated with organisations such as the Latin American Workers Association, LCC, Whitechapel Gallery, Tate Modern and South London Gallery. Currently she is working from an ice cream van based in Hackney City Farm, as part of the Interference project commissioned by Artsadmin.

You can see Rebecca's work during our launch for Elefest on Saturday 6th October and Sunday 7th!