In the run up to our new Heygate gallery space opening for Elefest 2012 we will be posting daily features on the artist, musicians and performers involved in Saturdays launch.

He has worked extensively in Europe and the UK for 25 years, both collaborating and producing his own solo work.

His individual hybrid art-form has been developed and influenced by circus performers such as Archaos and the edgy, daring and dangerous traditions of European spectacular street theatre and festivals, - traditions which have also spawned contemporary companies such as Mutoid Waste, La Fura dels Baus, Derevo and the infamous DNTT of which Paka was a founding member and an Artistic Director from 1989 –1997.

His Theatre company Black Hole has since produced works such as, “The Singularity” and, more recently “Forget Me Not” – both of which have received wide spread critical acclaim in the UK.

Horse Work
He has been working with his horses for the last 10 years creating Don Quixote themed shows of differing styles and scales, from pyrotechnic spectaculars in Underground Art Festivals, Jaw dropping street animations in Beijing to theatrical mime for the London International Mime Festival.

The Characters
Paka is a cantankerous old man lost in the twilight of obsession, having misplaced the thread between fantasy and reality he is off on his final adventure. A head full of romantic dreams and a pocket full of nuts and bolts. He is on a quest for love and sunsets to ride into. A contemporary Don Quixote armed with roses, pyrotechnic gadgets and a tantalising whiff of razzmatazz.

Rusty the Horse is visually extraordinary, a remote control entity that acts as a people magnet. With his own distinct character, philosophy and ego, he leaves the audience feeling they have met an odd but real horse.

The theatre and mayhem are derived from the interaction between Paka, Rusty and the audience. It is in fact a double act albeit one half is robotic. The characters that inhabit this slice of parallel reality have an endearing universal relationship, where differences of priority and agenda have obscured the common goal.
The out-come is up for grabs…. 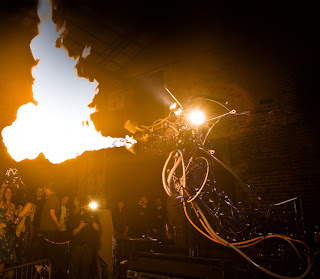 Life has constraints to freedom: Even if they are pleasurable.
What is left to us then but Fantasy?

Paka has been holed up in London for the last few years for various reasons...... in contrast to constantly touring.

What better than constructing fantasy creatures to pass the time?
A culmination of two years hard graft... Paka offers this preview of his new work
ELSIE dragon at the launch of Hotel Elephants new gallery space on the Heygate Estate.
A firery kinetic sculpture
As always work in progress but at a very presentable stage

Designed to be interactive in control...offering the public a chance to control its own fantasy creature. Your reactions and interactions will help shape a future theatrical context for this new beast. 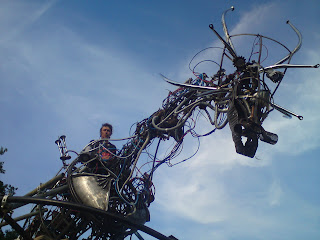