This months SLAM Last Fridays is shaping up to be a interesting one. It is the first time we have shown performance work in the gallery and we are very excited. We are also hosting this months SLAM afterparty for the Bankside area, where we will be dancing till midnight! 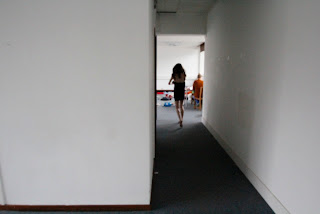 The Industry Presents:
An exciting evening of performances specially created for this months SLAM Last Fridays. The Industry is a group of six performance-makers whose paths crossed in an exhibition earlier this century. They now come together to be productive in creativity and have found a home at Hotel Elephant. The Industry includes Hrafnhildur Benediktsdottir, Tuuli Hynynen, Alexandrina Hemsley, Amanda Prince-Lubawy, Christopher Matthews and Else Tunemyr.Hotel Elephant will also be hosting the after party for Bankside, with a bar & music till late. Performances: 6pm-9pm

Afterparty: 9pm-Midnight
A
Posted by Hotel Elephant at 08:00